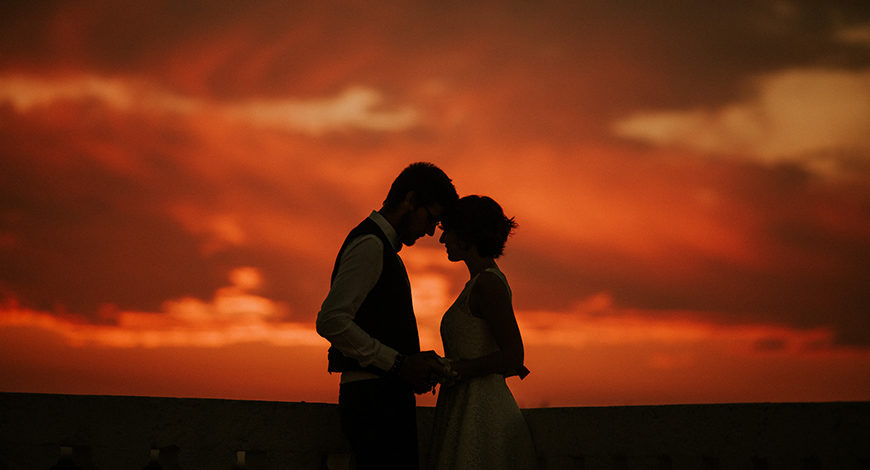 Story of a marriage proposal in the Itria valley

One morning in June, while I was dealing with the details of several weddings I had to organize, in the choking heat of Puglia and with my adrenaline spiking, I received a phone call from an international number. I heard a voice with a Spanish accent: his name was Fabio and spoke a good Italian. He had called to make me a proposal. I interrupted the many things I was doing to hear what he had to say. Fabio decided to ask his girlfriend to marry him, and wanted me to organize his marriage proposal!

Fabio’s requests sounded to me like one of those hundreds of fairy tales that you are told when you are a little girl, with the prince that rescues the princess from the castle in which she has been imprisoned. I felt that he had a sensitive soul, and that he wanted that moment to be special and unforgettable, not to amaze relatives and friends but rather to share with his girlfriend something unique, far from prying eyes and comments.

When I hung up, I felt deeply touched and excited. I had been assigned an important task, so I immediately started to look for a place in which I would like myself to receive such proposal.

“She really has good taste. We have visited Italy several times, and we love stylish rural places”.

These are some of the indications that Fabio sent to me by email; I needed some traces to follow in order to join their path and lead the two lovers, discreetly, where they wanted to go.

I recommended to Fabio a masseria farm located in the town of Ostuni, in the Itria valley – an enchanted land. It is a perfect place for a marriage proposal, as I wrote here some time ago.

Every year, on the occasion of her birthday, the couple goes out for dinner, in some romantic venue. This time, however, it should have been more special than usual. Fabio and I planned everything, trying not to give her the slightest clue. It was not easy, since they were on holiday in Puglia and there were few occasions for us to speak at the phone!

Despite some little hitch, everything went smoothly. After that, I’ve got convinced that I would be a good secret agent!

With a touch of magic and a cascade of lights

I arrived at the venue on time, in “disguised clothes”; nobody knew my true identity, with the exception of the staff. My task was even more difficult as I had little time at disposal! The couple would take their aperitif on the terrace (in the same place where Fabio would make his marriage proposal later) and then go to the swimming pool area for the dinner. I had just an hour to set up everything.

They had dinner at the poolside – a romantic night for her birthday, as their private ritual wants it. While they enjoyed their dinner, I arranged everything on the terrace: rose petals, torches, lanterns, cushions and a curtain of lights – a sort of threshold to be crossed to reach a new dimension. The rows of lights let have a glimpse in what lay beyond. I had imagined the light curtain precisely as a means to separate the setting from the rest. In that private space, I had put cushions and photos of the couple – an illustrated story of their love story.

I had just finished my work when the owner of the farm came up on the terrace and told me that the couple had had their second dish and that he was bringing them upstairs on the pretext of serving the dessert in another place.

Oh my Godness, I was so excited! Imagine a whole masseria completely at dark, the only light coming from the torches, the candles and a cascade of little light bulbs: a surreal atmosphere! Had I been the “unaware” girlfriend, I would have burst in tears. In fact, she did what all of us would have done in that situation: she cried and, above all, she said “yes, I do”!

Wedding planners deal with romance every day, they are always in search of new ideas, and rack their brains in order to turn even the humblest place into something else.

But despite all the kisses I’ve seen, the touching “I do” I’ve heard, all the handkerchiefs discreetly handled by the brides’ fathers, and the successful wedding parties I’ve organized, I can tell you that this was a real surprise. Fabio made me a great gift by calling me and then choosing me as the organizer of his marriage proposal in Puglia.

“Together is better!”, the motto of this couple (you can read it on the two little blackboards in the photo below) is the most beautiful love declaration I’ve ever heard.

It’s a choice: two people are stronger if they are together.

marriage proposal in Puglia
Your wedding in Puglia: three “I do” in June
September wedding: Margherita and Victor just married!